Dollar is extending its broad-based rally today. But other positions are somewhat changing. Sterling is now recovering as traders take profit, while awaiting an unconfirmed statement from BoE. Euro is also paring some recent losses. Meanwhile, Swiss Franc, Yen and Canadian soften in general. Australian and New Zealand Dollar are mixed.

Technically, while Sterling recovers, it’s too soon to call for bottoming. The levels to watch included 1.1404 support turned resistance in GBP/USD, and 0.8720 resistance turned support in EUR/GBP. As for GBP/CHF, break of 1.1146 resistance is needed to confirm bottoming at 1.0183. Otherwise, price actions from there are viewed as part of a corrective pattern only. Down trend would resume for another low after the correction completes. 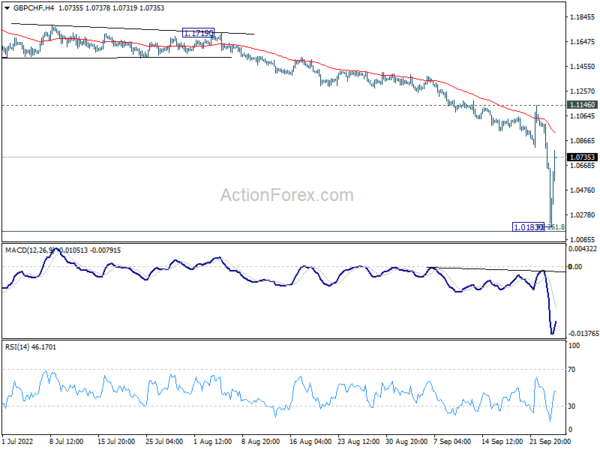 In the hearing of a European Parliament committee, ECB President Christine Lagarde said, “most measures of longer-term inflation expectations currently stand at around two per cent. However, signs of recent above-target revisions to some indicators warrant continued monitoring.”

“The risks to the inflation outlook are primarily on the upside, mainly reflecting the possibility of further major disruptions in energy supplies,” she said. “While these risk factors are the same for growth, their effect would be the opposite: they would increase inflation but reduce growth.”

“We expect to raise interest rates further over the next several meetings to dampen demand and guard against the risk of a persistent upward shift in inflation expectations… Our future policy rate decisions will continue to be data-dependent and follow a meeting-by-meeting approach,” she said.

ECB Vice President Luis de Guindos said in a conference today, “we are seeing that in the third and fourth quarters there is a significant slowdown and we may find ourselves with growth rates close to zero.” He also noted that inflation in becoming increasingly broad and further rate hike will depend on incoming data.

Separately, Governing Council member Boris Vujcic said this months’ 75bps hike was “the right way to go”. “Inflation, if it’s persistently strong, has to be the clearly dominant goal,” he added. “Paying much attention to lower growth now, at the expense of fighting inflation, is often luring. But letting inflation become entrenched always has a higher cost than a temporary decline in GDP.”

Ifo said: “Companies assessed their current business as clearly worse. Pessimism regarding the coming months has grown decidedly; in retail, expectations have fallen to a record low. The German economy is slipping into recession.”

BoJ Governor Haruhiko Kuroda said today that rapid currency moves were undesirable as they would have a negative impact on the economy. He added that intervention to address exchange volatility was the appropriate move.

Also, he pledged in a speech that BoJ will “continue with monetary easing so as to firmly support Japan’s economy from wage increases.”

Kuroda also noted, it’s “highly likely” for the economy to continue recovering following three factors. The first is improvement in exports, production, and business fixed investment. The second factor is solid private consumption. he third factor is that, with the government relaxing entry restrictions, inbound tourism demand is expected to recover. But he also pointed out risks from COVID-19, and developments in overseas economic activity and prices.

Japan FM Suzuki: Will take action against speculations on Yen if needed

“We took appropriate action against excessive volatility driven by speculators. The intervention has had a certain effect,” he said, referring to last week’s intervention to support Yen. “There is no change in our stance that we will take (further) action if needed.”

“Governor Kuroda expressed Thursday in his remarks his strong concerns about the rapid depreciation of the yen. We have a shared view on this with the BOJ,” Suzuki added.

Joe Hayes, Senior Economist at S&P Global Market Intelligence, said: “Business are reporting concerns around the economic outlook amid steep cost pressures and the rising likelihood of a global economic downturn. The remarkable weakness we’ve seen in the year-to-date in the yen continues to push up price pressures, with companies struggling to fully pass on these higher costs burdens to clients. Subsequently business confidence slumped to a 13-month low”. 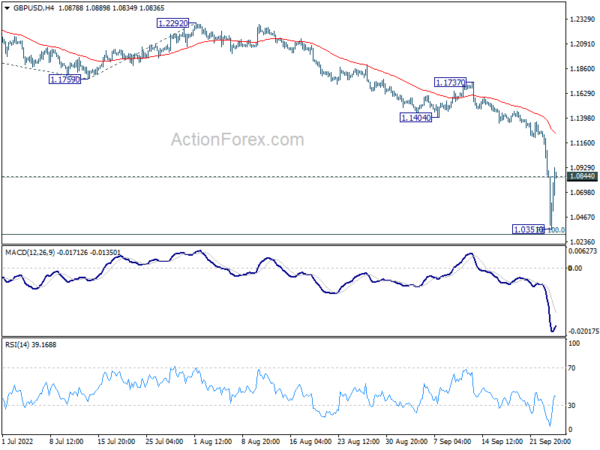 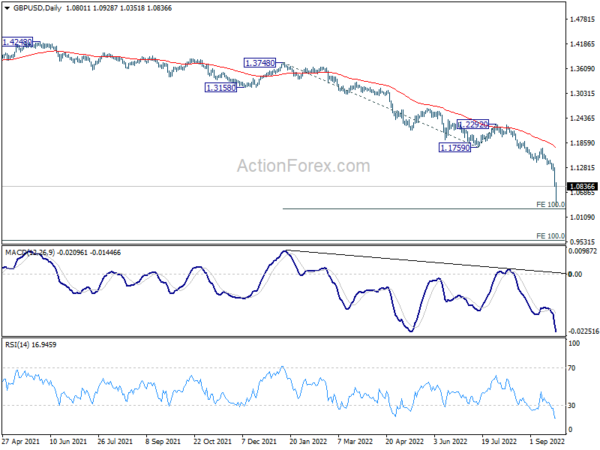 Read More: Sterling Stabilizes and Recovers, But Too Soon to Confirm Bottoming

Rallies to Continue the Consolidation

USDCAD: Bears are in control