The Crypto Market Has Chosen the Downward Path

Bitcoin is losing 2% over the past 24 hours, hovering near $18.7K at the time of writing. Attempts at intraday gains have been shattered by the adverse market reaction following the Fed’s forecasts and comments. BTCUSD has been declining for eight of the last nine days.

Below current levels, Bitcoin has traded for just 17 hours in June, and on a sustained basis, it has not been lower since last November. Barring potentially very minor levels at $17K and $16K, on the chart, there are no meaningful consolidation areas for the first cryptocurrency down to $12K. Going down there looks like a very ambitious task for the bears, even with the current market. 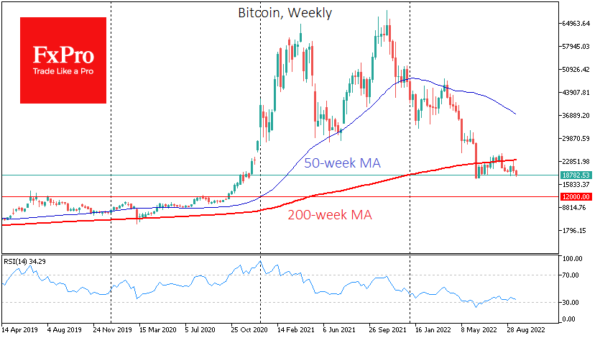 A US court has ordered Tether, the issuer of USDT, to provide USD reserves data, including account statements from banks and other institutions.

Meanwhile, a new bill has been introduced in the US Congress that proposes to ban the creation of algorithmic stablecoins like TerraUSD for two years.

The XRP token has risen 22% in the past six days amid a possible SEC court case against Ripple Labs on an expedited basis. Both sides have petitioned the court to do so.

“White Hacker” received 400 ETH (about $531k) from Arbitrum for identifying a vulnerability in Arbitrum’s protocol code that could have resulted in millions of dollars in lost cash.

Read More: The Crypto Market Has Chosen the Downward Path

The Pound’s Collapse Could Trigger Its Reversal

USD/JPY: What’s Next after Government Intervention for Yen?

Dollar Upside Breakout after Hawkish Fed, SNB and BoE Next

The Dollar is Creeping Up