At 5:30 pm on Jan. 6, police were in their third hour of battle with supporters of former President Trump on the steps of the U.S. Capitol. Meanwhile, about a mile away in a suite at the Willard Intercontinental Hotel, Amy Kremer, a conservative activist who organized a major pro-Trump rally near the White House that preceded the violence, apparently had hors d’oeuvres on her mind.

Kremer sent her fellow rally organizers a text preceded by three siren emojis. It was an urgent update.

“We ordered dinner again tonight. Sorry, but we forgot to take orders in the chaos of the event this morning, so we just ordered the same thing as last night. I figured that was better than not eating. Lol,” Kremer wrote. “Cheese & Charcuterie should be here at 6PM and dinner around 7PM.”

An emergency curfew took effect and National Guard troops arrived at the Capitol to clear the remaining crowds at roughly the same time Kremer and her fellow organizers received their cured meats. Three sources, who spoke on the condition of anonymity due to the ongoing investigations into the rally, told Rolling Stone that, along with food, people were drinking champagne in the suite while rioters skirmished with law enforcement at the Capitol complex.

Kremer’s insurrection night dinner order was detailed in a series of text messages and group chats from January 6 rally organizers that were obtained and reviewed by Rolling Stone. The messages included months of discussions as Kremer’s “March For Trump” group staged a bus tour around the country to protest the former president’s election loss. The conversations revealed new details of the rally organizers’ coordination with the Trump White House.

Kremer’s Jan. 6 rally took place on the White House Ellipse as Trump’s election loss was being certified at the U.S. Capitol. The event featured a speech by Trump where he urged the crowd  to “fight like hell,” and indicated he expected them to march to the Capitol complex. Some of the audience at the rally began making the approximately mile-and-a-half long trek to the Capitol as Trump concluded his remarks. The barricades at the Capitol were breached minutes before the former president finished the speech.

Two sources who were involved in planning the Ellipse rally previously told Rolling Stone they had extensive interactions with members of Trump’s team, including former White House Chief of Staff Mark Meadows. The text messages provide a deeper understanding of what that cooperation entailed, including an in-person meeting at the White House. Rally organizers also described working with Trump’s team to announce the event, promote it, and grant access to VIP guests. A spokesperson for the former president did not respond to a request for comment on the record.

Group chats also provided a glimpse of tensions between rally planners. And the conversations showed how their core group reacted to the chaos that erupted that day in real time, including Kremer rejecting calls to hold a press conference denouncing the violence.

Rolling Stone reviewed the text messages in a phone where they were originally received and timestamped. The messages from Amy Kremer and her daughter, Kylie Jane Kremer, came from phone numbers that have been used by both women. We are publishing excerpts of these messages as they were originally written including some typos.

Kremer, who began her political career as a Tea Party activist, is the chairwoman of Women For America First, the pro-Trump organization that obtained the permit for the Ellipse rally. Kylie is the group’s executive director.

Along with Women For America First, Amy Kremer was also a leader of March For Trump, a group that was launched in 2019 to protest against Trump’s first impeachment. In late November of 2020, after Trump’s loss to President Joe Biden, March For Trump began a bus tour with events around the country, where Kremer and other conservative activists promoted false conspiracy theories about the election and called for the results to be overturned. On Nov. 28, 2020, the day before the bus tour began, Kremer texted fellow activists in a group chat.

“​​Welcome to the March for Trump bus tour,” Kremer wrote. “We are going to save the world!” 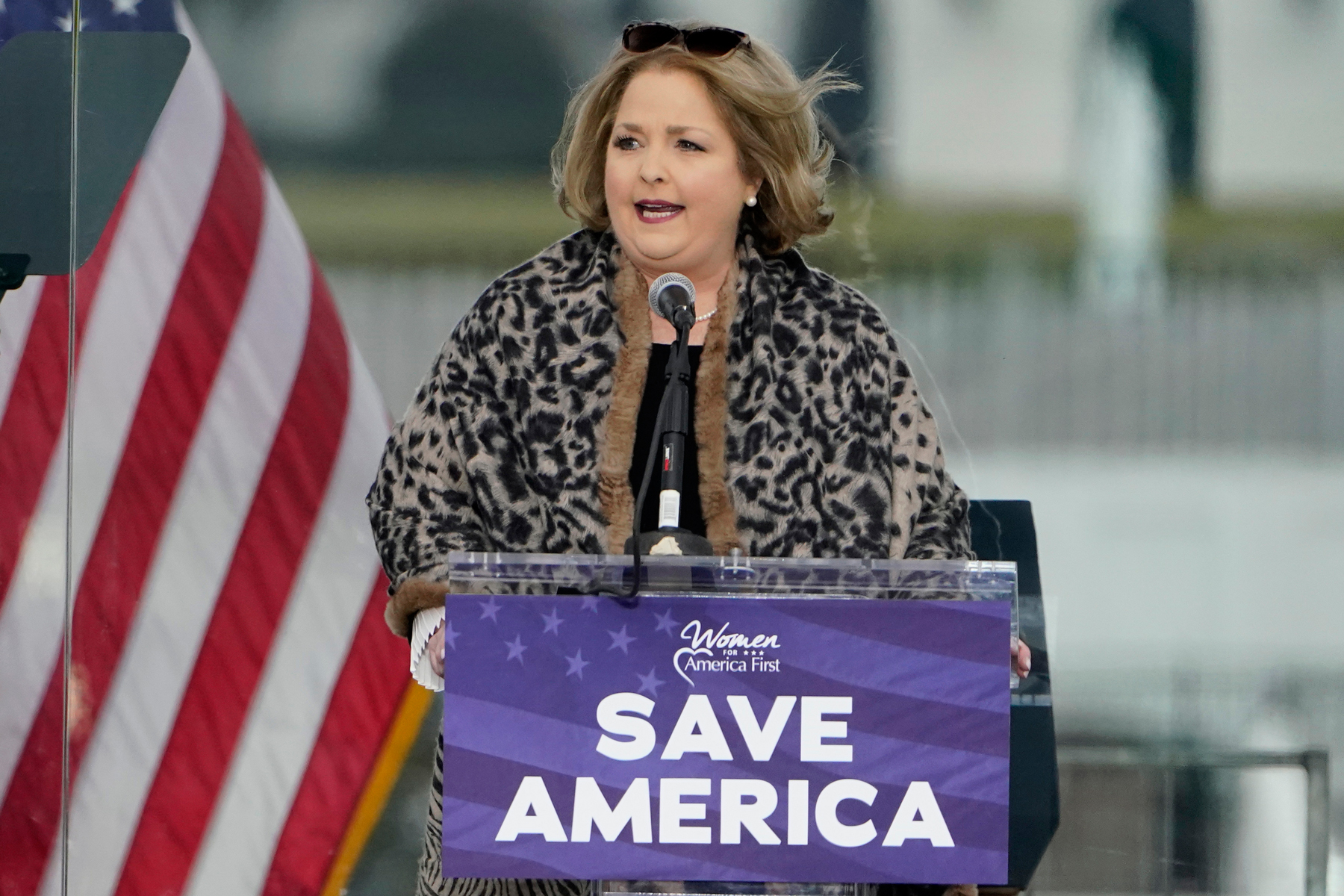 Amy Kremer, founder and chair of Women for America First, speaks in Washington, at a rally in support of President Donald Trump on January 6, 2021.

Two days later, Kremer texted some of the organizers to let them know she was temporarily getting off the bus to travel to Washington for a White House meeting.

“For those of you that weren’t aware, I have jumped off the tour for the night and am headed to DC. I have a mtg at the WH tomorrow afternoon and then will be back tomorrow night,” wrote Kremer. “Rest well. I’ll make sure the President knows about the tour tomorrow!”

The message describing Kremer’s White House meeting is one of several where she and Kylie, indicated they were in communication with Trump’s team. Both Amy and Kylie Kremer did not respond to requests for comment on the record. Chris Barron, a spokesperson for the Kremers, called Rolling Stone to insist elements of this reporting are untrue.

Barron repeatedly declined to answer specific questions about which aspects of the story he wanted to dispute.

The texts reviewed by Rolling Stone reveal that on December 13, 2020, Kremer texted the group to say she was “still waiting to hear from the WH on the photo op with the bus.” On January 1, before the Ellipse rally was publicly announced, Kylie sent a message to another group chat that said she was still working on the permits and “just FYI – we still can’t tweet out about the ellipse.”

“We are following POTUS’ lead,” Kylie wrote, using an abbreviation for the president.

Two days later, on January 3, March For Trump activist Dustin Stockton texted one of the team’s groups to ask who was “handling” rally credentials for VIPs. “It’s a combination of us and WH,” Kylie replied.

Stockton’s fiancee, Jennifer Lawrence, had a similar question when she asked a chat group where media credential requests for the Ellipse rally were going after being submitted on the group’s website.

“To campaign,” Kylie responded in an apparent reference to Trump’s re-election team. “They are handling all.”

Stockton and Lawrence did not respond to requests for comment on the record.

On January 3, Trump tweeted an announcement that he would be attending the Ellipse rally. Trump also retweeted posts from Lawrence and Kremer advertising the event. Some of these messages were excitedly shared in a March For Trump group chat.

“Whoop whoop,” wrote Greg Locke, a Tennessee pastor who was a fixture on the bus tour. Locke added a heart, praying hands, and “100” emoji for good measure. Locke did not respond to a request for comment on record.

The House Select Committee investigating the January 6 attack has subpoenaed documents and testimony from both Amy and Kylie Kremer. The pair were asked to give depositions on Oct. 29. The committee has indicated it will consider criminal contempt referrals against individuals who defy its subpoenas. A spokesperson for the committee declined to comment on whether the Kremers have complied with the subpoena.

Multiple members of Trump’s inner circle — including former White House officials — have also been subpoenaed by the committee as it examines the role the former president’s team played in the events of January 6. An attorney familiar with the investigation, who spoke on the condition of anonymity due to the ongoing probe, told Rolling Stone the congressional investigators have obtained “tons of” group chats from organizers.

As the big rally approached, the group chats grew even more excited. On the morning of January 5, Kremer texted the organizers and declared “we are about to be part of a pivotal and historic moment in our nation’s history.”

“Thank you for taking this journey with Women For America First. I love you all and am grateful for each of you,” Kremer wrote, adding, “Let’s go save the Republic!”

But the conversations weren’t all celebratory. The group chats also revealed some of the tensions behind the scenes of the efforts to protest Trump’s election loss.

Kremer and Women For America First weren’t the only ones involved in planning events to protest the election result. Another group, Stop the Steal, which was led by far right activist Ali Alexander, held its own rallies around the country and planned a “Wild Protest” outside the Capitol on January 6. Two sources who were involved in…

January 6 timeline: How Trump tried to weaponize the Justice Department to overturn the