Market sentiment is stable today, with European index trading mildly higher while US futures point to a rebound. But overall direction remains rather unclear. Sterling is currently the stronger one, with additional help from buying against other European majors. Kiwi is also firmer, awaiting tomorrow’s RBNZ rate hike, followed by Dollar. On the other hand, Swiss Franc, Yen and Euro are the softer ones. Aussie is mixed after an uneventful RBA decision earlier in the day.

Technically, we’ll keep an eye on Sterling again. In particular, EUR/GBP is heading closer to 0.8499 near term support. Firm break there will indicate completion of rebound from 0.8448 and bring retest of this low. Such development would also reaffirm medium term bearishness after prior rejection by 0.8668 resistance. GBP/JPY is also heading towards 152.54 resistance. Firm break there will suggest completion of correction from 156.05, after multiple test on 149.03 key support. Stronger rise would be seen back towards 156.05 high next. 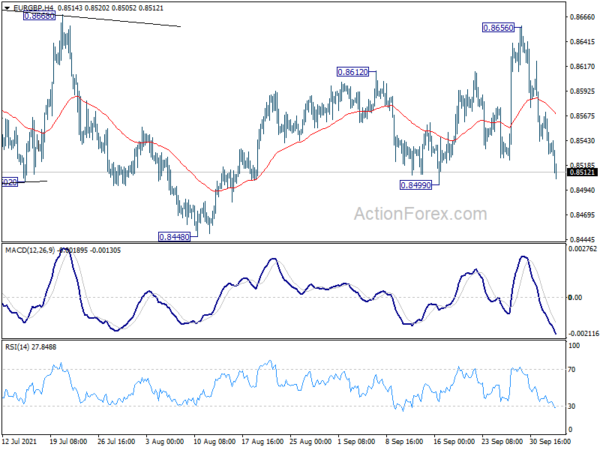 US trade deficit widened to USD 73.3B

Canada exports rose 0.8% in August while exports dropped -1.4%. Trade surplus widened to CAD 1.9B, versus expectation of CAD 0.3B.

Chris Williamson, Chief Business Economist at IHS Markit said: “The current economic situation in the eurozone is an unwelcome mix of rising price pressures but slower growth. Both are linked to supply shortages, especially in manufacturing, which has seen a steeper fall in output growth than services… Although for now the overall rate of expansion remains relatively solid by historical standards, the economy enters the final quarter of the year on a slowing growth trajectory. A drop in business confidence to the lowest since February adds further downside risks to the outlook.”

UK PMI Services was finalized at 55.4 in September, up slightly from August’s 55.0. PMI Composite was finalized at 54.9, up fractionally form August’s 54.8. Markit said charges rose at record pace amid supply constraints and spike in costs. Staff shortages held back output and new orders. Backlogs accumulated for the seventh month running.

Tim Moore, Economics Director at IHS Markit: “The supply chain crisis put a considerable brake on recovery in the UK service sector during September. Survey respondents widely noted that shortages of staff, raw materials and transport had resulted in lost business opportunities… Another spike in operating expenses was reported… even though this data is yet to fully reflect the inflationary impact of the UK fuel crisis and surging energy prices…

“Tight constraints on business capacity and rampant supply chain uncertainty meant that service providers have become more willing to pass on higher costs to customers. The latest rise in average prices charged by UK service sector firms was the fastest in over 25 years of data collection, with many businesses reporting more frequent reviews of pricing due to escalating cost increases by suppliers.”

RBA left monetary policy unchanged as widely expected. Cash rate is kept at 0.10%. Target for April 2024 Australian Government bond yield is also held at 0.10%. The asset purchase program will continue at AUD 4B per week until at least mid February 2022. RBA also maintained that the condition for rate hike “will not be met before 2024”.

It maintained that the set back to economy expansion by the Delta outbreak is “expected to be only temporary”. In the central scenario, the economy will be growing again in Q4, and is expected to be “back around its pre-Delta path in the second half of next year”.

On labor market, RBA said it’s business liaison and job vacancies data suggest that “many firms are seeking to hire workers ahead of the expected reopening in October and November.” Wage and price pressures remain “subdued” and disruption to global supply chains on overall inflation “remains limited”.

Australia trade surplus swelled to another record in Aug

Australia goods and services exports rose AUD 1923m or 4% mom to AUD 48.52B in August. The surge in exports was led by LNG, hard coking coal and thermal coal, on both higher prices and volumes. Goods and services imports dropped AUD -506m or 1% mom to AUD 33.44B. Trade surplus rose from AUD 12.65B to AUD 15.08B, above expectation of AUD 10.10B, and hit another record high.

Also released, retail sales dropped -1.7% mom, -0.7% yoy in August. Ben James, Director of Quarterly Economy Wide Surveys, said: “Retail turnover continues to be negatively impacted by lockdown restrictions, with each of the eastern mainland states experiencing falls in line with their respective level of restrictions. In direct contrast, states with no lockdowns performed well with Western Australia and South Australia enjoying strong rises as physical stores were open for trade.”

AiG Performance of Construction Index rose sharply from 38.4 to 53.3 in September. Ai Group Head of Policy, Peter Burn, said: “The bounce in the Australian PCI in September was largely due to many fewer builders and constructors reporting further falls in activity after the clear majority saw activity slump in August… Looking ahead, the further easing of restrictions, and the resumption of work put on hold should see more decisive improvement in the sector in the months ahead”.

Usamah Bhatti, Economist at IHS Markit, said: “Overall private sector activity saw a sustained, albeit softer decline in September, led by a slower decline in the larger service sector. At the same time, manufacturing output and new orders were both in decline for the first time since late-2020.

“Businesses in the Japanese private sector also noted the strongest cost pressures for 13 years, as supply chain disruption continued to dampen domestic and global activity. Price rises were notably sharp for raw materials, staff and fuel. Regardless of this, firms were optimistic that an eventual end to the pandemic would occur within the coming 12 months, and provide a broad-based boost to demand and activity. As a result, IHS Markit expects the economy to grow 2.5% in 2021.”

Intraday bias in GBP/USD remains mildly on the upside at this point. Rebound from 1.3410 short term bottom would target 1.3749 resistance first, which is close to 55 day EMA (now at 1.3745). On the downside, though, below 1.3530 minor support will retain near term bearishness, and turn bias back to the downside for 1.3410 low. Firm break there will extend the fall from 1.4248 and target 1.3164 medium term fibonacci level next. 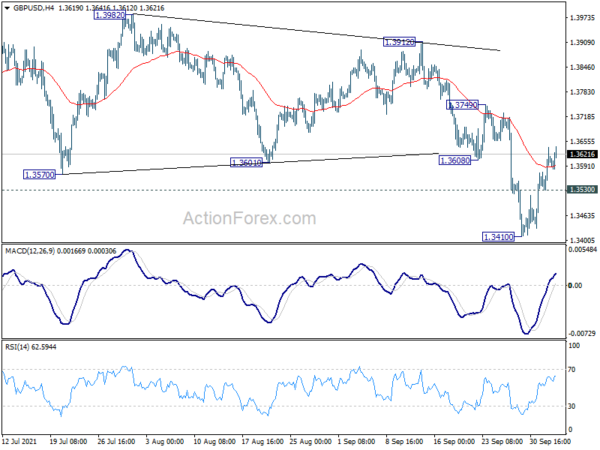 Euro Pop Setting Up for a Drop- EUR/USD Levels