As the entire crypto sector’s market cap continues to plummet, the two major cryptocurrencies Bitcoin and Ethereum are poised to crash through major support levels, which is likely to lead to another sharp drop of up to 50%.

It has been a bad couple of weeks for cryptocurrencies. It was only six weeks ago that the sector was reaching new record highs and making millionaires out of novice investors. Since that peak in mid-April, more than half of the value has been wiped off Bitcoin, and a further fall is looking likely. So, what is most likely to be in store for crypto over the coming days and weeks, and how could you profit from it?

The first thing to understand is that there is an overall decline in virtually every single cryptocurrency which is not pegged or otherwise tied to the value of a non-crypto asset. If you look at recent price charts of any almost any major cryptocurrency, you will see nearly identical declines in all of them.

This is a bad sign for bulls in any cryptocurrency. A strong decline in the asset class overall is a sign that they are swimming against the tide. You might pick the best cryptocurrency, but all you will likely get for that is the smallest loss, not a win.

There are so many bearish signs in the Bitcoin price chart shown below it is hard to know where to begin: 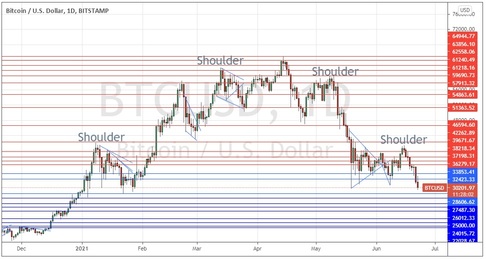 Until recently, Ethereum was holding up better than Bitcoin, which marked an unusual role reversal from most of the crypto era. This is no longer the case as Ethereum is doing just as badly as Bitcoin in some respects, although the full downside may be limited:

What Does This Mean for Traders?

Unfortunately, the wild crypto boom of recent years has seen many, mostly younger traders and investors sucked in to buying cryptocurrencies due to fear of missing out. This is completely understandable, as fortunate were made very easily and almost by accident while doom-mongers were making their warnings.

Anyone who thinks cryptocurrencies can only go up and so dips should be bought, is not facing reality. The truth is that any cryptocurrency, whether Bitcoin or Ethereum, cannot be accurately priced at fair value or any other intrinsic value, and it is for exactly this reason that they are so volatile.

A couple of years from now, it is possible that one Bitcoin could be worth half a million dollars, or nothing.

The way for traders to have the best chance to profit from price movements in cryptocurrencies is to be prepared to trade momentum either long or short, being very ready to exit trades quickly when they go wrong or stop advancing in the desired direction.

Traders right now should be seriously considering short-term trades in major cryptocurrencies in the short direction. Effectively, this is best done by using cryptocurrency CFDs from a reputable Forex / CFD broker.

GBP/USD bulls stepping back in to target higher highs, 1.4000 eyed

GBP/USD bulls stepping back in to target higher highs, 1.4000 eyed