The debate between whether inflation is temporary (“transitory” in Fedspeak) or here to stay remains open. What’s no longer in debate is that we’ve got it now.

Consumer price index data this morning came hotter than expected. The headline reading for May showed a monthly rise of 0.6% while the core reading that strips out food and energy showed a 0.7% gain. A Briefing.com consensus had expected a 0.4% rise for both the headline and the core readings. The numbers are below the 0.8% and 0.9% headline and core monthly growth numbers from April.

On a yearly basis, the overall number rose 5%, which marked the biggest 12-month increase since a 5.4% rise in August 2008. The yearly core rise was 3.8%. While that yearly core rise could be troublesome as it’s well above the Fed’s 2% target—at least for core personal consumption expenditures inflation—keep in mind that the year-over-year comparison could look more dramatic because most of the economy was locked down a year ago and crude prices sank to record lows.

Interestingly, stock index futures didn’t move too much on the inflation data, and perhaps that’s because the 10-year Treasury yield has been in a downtrend lately, indicating there may not be too much additional worry in the market about inflation after weeks of pricing it in.

Really, what this morning’s data does is smack the ball back into the Fed’s court. Remember: The Federal Open Market Committee meets next week, and Fed watchers will be focused on any hints, changes in language, or other clues as to the Fed’s rate outlook and timeline for tapering its bond-buying program.

There seem to be a few key levels the market is watching outside of equities. In gold, it’s $1,900, and this morning the precious metal has been moving away from that round number. Crude oil starts the day slightly above $70, and investors seem to be watching whether it can hold above that level because that mark is where airlines tend to start hedging their fuel costs. Meanwhile, the 10-year Treasury yield is back above 1.5% but below previous support at 1.55% (see chart below).

Otherwise, we’re watching the Dow Jones Industrial Average ($DJI) to see whether it can break its losing streak and the S&P 500 Index (SPX) to see whether it can notch a new high. Outside of the meme stocks, volume has been pretty muted, and we’ll have to see if that continues during the last two trading days of the week.

Yesterday, range-bound trading seemed to indicate that investors were in a wait-and-see mode.

At the very least, they may have been waiting for this morning’s inflation data, but there also may be a tendency to keep some powder dry ahead of next week’s Fed meeting where central bankers may shed some more light on their thinking about how transitory a spike in prices might be.

What’s at stake is when monetary policymakers might begin to taper down their asset purchases and when they might start seriously thinking about raising interest rates. That would have implications for technology and other growth stocks, although it’s arguable that some of that fear has already been priced in.

The market didn’t seem too worried about inflation yesterday, as the yield on the benchmark 10-year Treasury fell below 1.5%. The declining interest rate may have helped keep some equity losses in check yesterday. (See more on inflation below.)

The social media effect was present in the market yesterday. While usual suspect GameStop (NYSE:GME) was up less than 1% ahead of its earnings report, Clover Health Investments (NASDAQ:CLOV) lost its gains to decline by double digits. Meanwhile, prison company GEO Group (NYSE:GEO) rocketed nearly 40% higher and World Wrestling Entertainment (NYSE:WWE) was up nearly 11%. Could some of the money have been flowing from GME and CLOV into the other stocks?

So-called meme stocks traded by retail investors on hype from the internet are certainly a factor affecting the market at the moment, and no one knows exactly how long that will last. Will it become a staple of trading over time?

Regardless, many of these stocks are volatile and arguably aren’t really trading on fundamentals. If you wade into the meme-stock swimming pool, keep your head above water by being ready for the risk they involve. Eye-popping price volatility has become the norm with many of these stocks. So be sure to keep your eyes wide open. 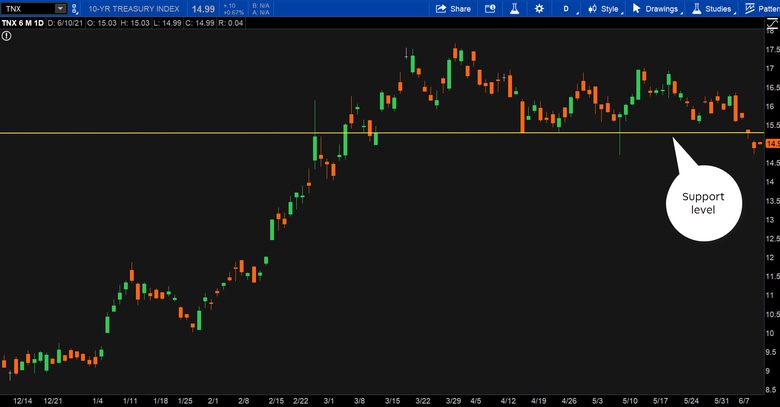 CHART OF THE DAY: YIELDING. On a day when stocks were waiting on inflation data, the yield on the 10-year Treasury, as represented here by the 10-Year Treasury Note Yield Index (TNX-candlestick), fell below its support level (yellow line). Was it a case of short covering? Thinking that the big version of an infrastructure bill won’t get passed? Or an indication inflation expectations have peaked? Whatever it was, it was a bit of a head scratcher. Data source: Cboe Global Markets. Chart source: The thinkorswim® platform. For illustrative purposes only. Past performance does not guarantee future results.

Peak Inflation Expectations? Inflation has been top of mind for Wall Street for some time even before this morning’s CPI report. But the falling yield on the 10-year Treasury yesterday doesn’t seem to make much sense if solely looked at through an inflation lens. “There has been a surge in the number of online searches containing the word ‘inflation,” investment research firm CFRA notes.  Despite that worry, the 10-year yield has fallen below 1.5%. CFRA thinks that may be “due to the D.C. gridlock that likely stamped ‘DOA’ atop the $1.7 trillion Biden infrastructure proposal and questions the need for further fiscal assistance.” Briefing.com said yesterday’s marked decline in the 10-year yield signals peak inflation expectations.

Driving Oil Demand: Speaking of inflation, one input—crude oil—offered some interesting action yesterday. The international benchmark settled unchanged after hitting its highest point since May 20, 2019, while the U.S. benchmark settled slightly lower after hitting its highest point since October 2018. The crude oil inventory figure released by the Energy Information Administration showed a draw of more than 5 million barrels. But when you look at the gasoline statistic, it showed a rise of 7 million barrels. That increase came during the week of Memorial Day driving. It’s possible that motorists didn’t take to the road as much as they have in the past because of the lingering effects of the pandemic. But as Reuters reported, analysts have been saying that poor weather may have reduced demand after a period of hoarding during the Colonial Pipeline outage. One source told the news agency the lack of demand might foreshadow peak economic activity but that it’s too early to conclude that. For whatever reason, the lack of gasoline demand seems to have taken the sheen off oil prices, at least for the moment.

Raising The Roof: At the moment, it seems that the housing industry is on the forefront of dealing with inflation. Toward the end of last month, the National Association of Home Builders said lumber prices had more than quadrupled since April 2020 to more than $1,500 per thousand board feet, citing the Random Lengths Framing Lumber Composite Index. “Lumber prices alone are adding nearly $36,000 to the price of a new home, pricing millions of middle-class households out of the market at a level they previously could afford,” the NAHB said. NAHB First Vice Chairman Jerry Konter said a mismatch between domestic production and rising demand for building materials is behind the rise in lumber prices. U.S. sawmill output rose 3.3% in 2020, even as single-family construction increased 12% and the remodeling market grew by 7%, he said.

Read More: Stock Market Volume Has Been Subdued Outside Of Meme Stocks Like CLOV And WWE

Nifty today: SGX Nifty up 65 points; here’s what changed for market while you were

Is The Market Wrong About Diodes Incorporated (NASDAQ:DIOD)?

Will the BOE Offer Clues on Overturning its Dovish Stance Soon?

J.P. Morgan Stick to Their Buy Rating for Stellantis By Investing.com

European Open: Cable Steady Ahead Of BOE, German IFO Up Next

Will the BOE Offer Clues on Overturning its Dovish Stance Soon?

J.P. Morgan Stick to Their Buy Rating for Stellantis By Investing.com

European Open: Cable Steady Ahead Of BOE, German IFO Up Next