Flanked by the two officials, López Obrador in a video on Wednesday hailed Ramírez de la O as a “master of the economy . . . experienced, serious”.

Ramírez de la O, 72, is director-general of Ecanal, a private Mexican consultancy, and holds a doctorate from Cambridge. He is a longtime ally of the president and had been earmarked to become finance minister if López Obrador had won elections in 2006 and 2012.

He had, however, turned down invitations to take the finance portfolio after López Obrador became president in 2018.

The peso eased fractionally after the announcement. Mexico’s financial markets have been buoyed this week following midterm elections on Sunday, in which López Obrador failed to hold on to his two-thirds majority in the lower house of Congress, denying him the ability to change the constitution at will.

Some analysts were sceptical of the choice. “He has literally zero practical experience,” said Eduaro Suárez, vice-president for Latin America economics at Scotiabank.

If he’s taking over two and a half years into the president’s administration, Rogelio must know the game plan for public spending very well

The president reiterated there would be no change to his priorities: no debt, tax or energy price increases, and “the poor come first”.

That meant “he’s going to have to continue juggling,” said Gabriela Siller, head of economic analysis at Banco Base. López Obrador has slashed spending to the bone and spent rainy-day savings to pour resources into pensions, scholarships and pet infrastructure projects.

However, Mexico’s economy is rebounding from Covid-19 and is expected to grow as much as 6.5 per cent this year, after falling 8.5 per cent in 2020.

“If he’s taking over two and a half years into the president’s administration, Rogelio must know the game plan for public spending very well,” said Alonso Cervera, chief economist for Latin America at Credit Suisse. “He will very likely enable the president’s ideas regarding the energy sector.”

Herrera said Ramírez de la O was likely to draw up the budget, which must be presented by September. Also pending is a tax reform which top government sources said would not contain wealth or inheritance taxes. 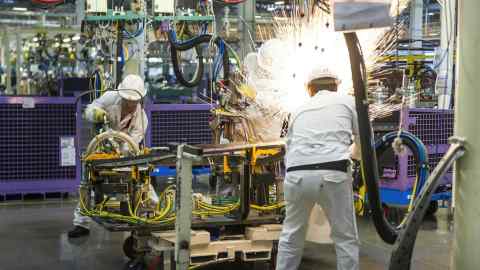 If confirmed by the Senate, Herrera — who counts former Federal Reserve chair Ben Bernanke among key influences — would complete a line-up of non-Banxico insiders on the central bank board. López Obrador had stressed the need for a “moral economist” at the helm.

Herrera is well-known to investors, but his closeness to the president makes his ability to uphold the central bank’s autonomy less clear. He said he expected to stay in his current post for about another month.

Díaz de León mounted a stern defence last year when legislators had pushed a bill that would have forced the central bank to absorb dollars that banks were unable to repatriate.

“I think Herrera has proven to be prudent, and has earned markets’ trust,” Suárez said. But he added: “He will have to work hard to signal strong independence from the government.”

Rising inflation puts Bank of England on the spot

Central-Bank Tapering Is Coming, and the Market Never Gets It Right

Where have all those central bank trillions gone?

Central Bank Digital Currencies: A Solution in Search of a Problem